Fourth consecutive year DMK Tax & Finance was chosen as a contributor to the Doing Business project of World Bank for the Paying Taxes indicator, this time for a year 2019.

You can download the full Report for 2019 at the following link: Doing Business 2019.

This year presentation of Doing Business 2019 for Serbia took place in Belgrade on 31st October 2018 at Crowne Plaza hotel.

The special guest of the conference was former Prime Minister and Minister of Finance of Georgia Mr Nika Gilauri who presented the reform achievements of this country in the conversation with Thomas Lubeck, regional IFC manager, who ranked Georgia among top 10 in the Doing Business list.

In terms of tax reform, Mr Gilauri highlighted that Georgia slashed the number of taxes from 21 to 6, and then to 5 and cut down tax rate of every single tax. They also simplified tax procedures and tax compliance, and got rid of double interpretations of tax regulation. He illustrated this situation with one example before tax reform: if someone wanted to import sport shoes in Georgia, custom duty was 30%, if someone wanted to import sneakers, custom duty was 0%. In this case, almost everybody imported as sneakers, subject probably to high corruption. 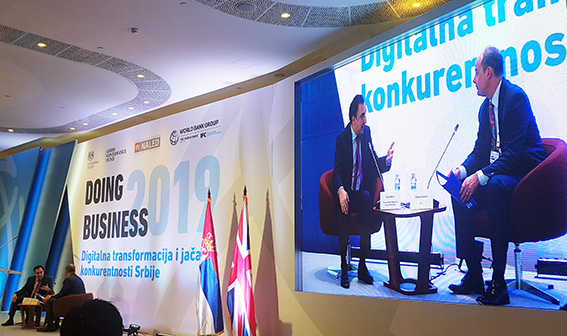 Doing Business 2019 report covered changes in 2017/2018. Doing Business rank of Serbia for 2018 was 48 out of 190 countries, which represents decrease of 5 positions, although in terms of points obtained in 2019 compared to 2018, Serbia has made progress from 73.13 to 73.49 points. These figures show that although Serbia has made the slight progress, other counties have made faster reforms.

The Paying taxes indicator for Serbia showed increase of in 3 positions, from 82nd to 79th position (in points increase from 73.63 to 74.75).